Chevrolet Sonic or similar.  Read: Sub-compact basic transportation.  That was the vehicle class waiting for us to pick-up at the airport in St. John’s, Newfoundland for our one week adventure on the rock.  Not surprisingly, I wasn’t terribly excited about the notion of spending seven days cooped up in a tiny econobox with the wife – not to mention having to transport our vast expanse of luggage to our B&B.  However, we were on a budget and this was the most affordable option for us.  Once more in my life the dynamic tag-team of common sense and price won the day against performance and luxury.

When our flight arrived, I saw a huge line forming at the rental counter.  Michelle agreed to wait there while I picked up our luggage at the carousal.  About 10 minutes and two successfully claimed gigantic suitcases later I rejoined the spousal unit at the rental car line.  There were way more people than I had initially thought and the line was moving slow.

After a few minutes I realized that the line was moving slowly because the rental company was running out of cars.  This resulted in them having to source vehicles from other rental providers at the airport.  I had always heard of rental car companies having to upgrade their clients because of a lack of supply.  Maybe this was my big break?  My mind began to boggle at the possibilities of what could be waiting for us in the parking lot.

Soon enough it was our turn to approach the counter.  Michelle and I filled out the paper work and we were handed a seemingly random set of keys.  I was pulling the luggage, so the wife got the keys.  I asked her to read what was written on the key fob.  Then she uttered two magical words: Ford Taurus. 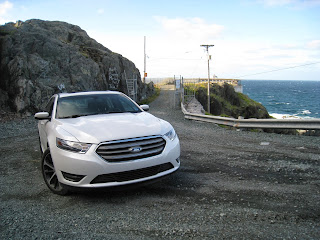 Now, the Taurus is a family sedan – full-sized, roomy and trunk space for years – so perhaps it isn’t the most exciting vehicle for a true automotive enthusiast.  But don’t forget, I was ex


pecting a Chevy Sonic, so to me the Taurus was a BMW M5 in comparison.

Until we found the car, the only things we knew about it was that it was a 2014 and it was white.  When it was located I couldn’t help but smile.  Our Taurus was  a mid-level SEL trim and was decked out with upgraded 20-inch rims, dual exhaust and an impressive, slab-sided presence.  Inside there was no push-button start, but there was MyFord Touch, satellite radio and leather seats.  All-in-all, the Taurus was handsome – not the same presence as a Chrysler 300 or as attractive as the new Impala, but good-looking nonetheless. 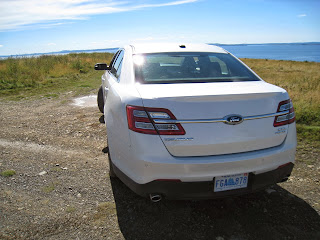 The first thing we did was load our luggage in the trunk.  At a smidgen over 20 cubic feet, the cavernous back-end storage space easily consumed our luggage with space to spare (yes, we may only be two people but we don’t travel light).  The Taurus – and I mean this as a complement to its practicality – is hands down the champion pack-mule of family sedans.

After loading up the car with our stuff, we settled into the front seats.  The interior was roomy enough, as expected in a car of the Taurus’ bulk, but the console was a little high and took a little getting used to.  Headroom was ample and the seats were comfortable.  All-in-all, the cabin was a great place to spend time in.  Thank God for that, since we ended up putting about 3000km on the poor thing in a scant 7 days. 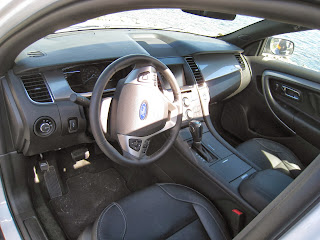 The cabin was a vast expanse of black and aluminum coloured plastic trim.  It wasn’t the most exhilarating interior design, but the lines were clean and pleasing to the eye.  The leather wrapped steering wheel felt substantial to the touch and included the typical controls for audio, cruise control, etc.  Also, most places where hand met car were clad in soft-touch plastic materials, which was nice.

Speaking of touch, this car was equipped with the aforementioned MyFord Touch infotainment interface.  The system uses a colour coded four-square design (possibly borrowed from Ford dealers’ sales forms), each quadrant controlling a different aspect of the car’s interior controls.  One can access said controls through the bright touch screen or via voice command.  Full disclosure: Michelle and I sat through a 20 minute 1-on-1 demonstration at last year’s Canadian International Auto Show, so we had little trouble adjusting to the touch screen interface.

However, voice commands were a different story.  Although we probably could have learned them well enough to be functional in less than a half-hour, we were on vacation and could care less.  Plus, we got by perfectly well without them.  Technophiles would probably want to explore those features more fully, though, so to them I apologise for that oversight.

I easily adjusted the multiple-direction power seats to a comfortable driving position (I got first-drive honours) and inserted the key into the ignition.  A binging sound and a turn of the wrist brought the 3.5L V6 to life.  The motor was mated to a six-speed automatic transmission with a sport-mode that forgoes paddle-shifters in favour of shifter knob thumb-controls – although for who’s favour I’m not sure.  Luckily, the automatic transmission was fairly competent when left to its own devices, holding revs up high in the power band, which encouraged spirited driving in Newfoundland’s twisty hills. 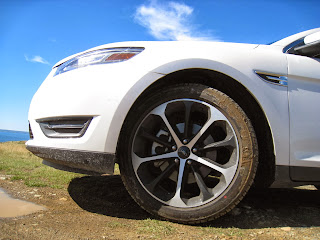 Now performance wasn’t on par with a full-fledged sports sedan, but the 288 horsepower produced by the Taurus’ power plant was more than capable scooting the cars 2-ton curb weight with verve.  Due to its size, the car likely wouldn’t make the cut as a first string canyon carver, but the chassis felt poised in every real-life driving situation we experienced in a week.

In fact, the car was great no matter what the roads threw at us.  Highways, gravel, mud trails, back country roads, confusing city streets – the Taurus was competent and easy to pilot.  In fact, despite the thick pillars that encapsulated the vehicle’s substantial cabin, the car had great sight lines (although back-up views were aided by a rear mounted camera).  Overall, we were very pleased with the cars easy driveability.

Fuel economy wasn’t the best.  We averaged about 11L/100km in a mix of city and highway driving.  My 2009 Buick Lucerne gets almost 2L/100km better than that overall and its power train is prehistoric in comparison.  That being said, we encountered a lot of hills during the week and the motor was likely still being broken in since the odometer only showed about 2500km when we picked up the car.  So, over the long-term it’s likely other people may experience better mileage than we managed.

Of course, the purchase price of the 2014 Ford Taurus was not provided with our rental car.  However, I was able to get an idea from Ford Canada’s build and price feature on their website.  Set up like our car, the Taurus retails (in $CAN) for about $37,000 out the door, including Ontario HST and current incentives.  Considering the competition (Chevy Impala, Chrysler 300/Dodge Charger) that’s about right on par for pricing – although I do believe the Taurus is the biggest of the domestic full-sized offerings, so if you buy your cars by the square foot this is the one to get. 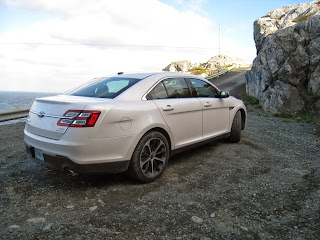 Overall, the Taurus is a practical, large family sedan that offers good performance and looks coupled with long distance comfort and easy about town driveability.  Sure, other than trunk size it really doesn’t do anything particularly better than any other car in its class.  That being said, it certainly doesn’t have any glaring weaknesses either.  One thing’s for sure, the Taurus was a great vacation buddy and at the end of the week I was sad to hand over the keys.  I can also say with utter confidence that the 2014 Ford Taurus is by far the best Chevrolet Sonic you can drive.

If you want to see more photos of the 2014 Taurus and some great Newfoundland scenery, check out the photo album at the Official Automophiliac Facebook page.