Another trip the auctions! What will we not bid on this time?!


When I grew up I was a picky child when it came to trying new things at the dinner table.  Every so often though, I would try something and get a taste for it.  I’m happy to report I have once more indulged in visiting a car auction (again with a $100 spend limit set by spousal imposition).  I went with, Dan, the same car buddy I went with last time.  Only now he was seriously looking to bid on a car.


I had contacted me earlier in the week saying he was going to go to another auction on the coming weekend.  It was only a text message, but I could tell by the liberal use of exclamation marks that there was an air of excitement about the whole thing.  Another message came... he was going to bid on a car!

The vehicle in question was a blue on tan 2010 Ford Flex with about 128,000km on the odometer and leather seats.  We had discussed on our last drive back from my first auction that Dan was going to try and get some spousal support on the decision to purchase a new vehicle for the family.  Now he had the green light to go get one and the Flex would be his first target. 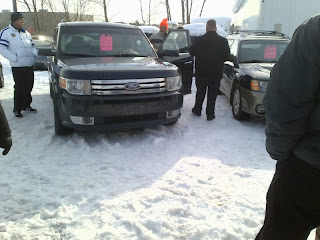 We arrived at the auction on Saturday about 15 minutes before the noon start time.  Dan and I took a few mintues to examine the Flex.  We were a little crest fallen to learn that the vehicle had sustained some damage during the high winds we had been experiencing in the previous weeks.  Nothing too major, but it would still require some work.  The condition of the interior seemed rather well loved as well.  But Dan was not deterred and looked at this with a bargain hunter’s eyes.  If it needed some work, hopefully it would discourage other bidding and lower the sale price of the Flex.

We took the rest of the time to look at the various treasures up for grabs.  Some highlights for me were a 1995 Volvo 940 Turbo Wagon (moderately low mileage but needed some cosmetic help, including a new front fender), a 2003 Infiniti G35 with 313,000km on it and a Mercedes C320 Coupe (manual transmission and a $22K insurance claim).  Another gem was a 4 generations old Chevy Malibu with only about 43,000km on it.  It looked brand new!

The order of the bidding was established and the Flex was coming up at the end.  We figured it would be the star of the show, anyway.  However, there was a surprise bidding war on a 2005ish Kia Rondo.

When we got around to the Flex it was a bit of a disappointment.  The bidding jumped up way too fast and when you take into account the closing costs of buying at an auction, the $8,000 winning bid was a little high for a Flex that needed that much work.

My heart also went out to that poor Volvo.  I was $400 short of saving it from the wreckers.  Bummer.

If you want to see a few more pics of the auction, check out the official Automophiliac Facebook page!

On a sadder note, the car world lost a great movie star over the weekend.  Paul Walker was a passenger in a Porsche that crashed and caught on fire on Saturday.  He was best known for his work on the Fast and the Furious series, which arguably brought about a renaissance in great car film making.  He will surely be be missed by his many fans.