A huge thank you to all my readers! And the story of an unloved Caddy.


Hey everyone!  Just want to thank everyone for checking out my last post.  It was my first to get over thirty readers... and then it was the first to get over forty!  I’m really happy to see that more and more people are checking out the blog.  Hopefully we can get more conversations going too!  So in that spirit, if you have any comments on what’s been posted, feel free to share them in the comment section at the bottom of each post.

So let’s jump onto the latest and the greatest (or, rather, old and not so great).  A couple days ago I saw an increasingly rare sight – the Cadillac Catera!  I am inexplicably fond of these cars.  I would probably never buy one knowing what I know now, but about half a decade ago or so I coveted them with an unhealthy zeal.

The Catera was released by GM in the late 1990’s as an attempt to garner more interest from younger buyers.  Rather than develop a new car, they rebadged one of their German made Opel Omegas, detuned the engine and softened the suspension (which is a great formula when you plan on competing with BMW).  Also, unlike every other Cadillac sedan at the time this car was rear-wheel-drive, which gave it much more performance credibility than any of its other offerings. 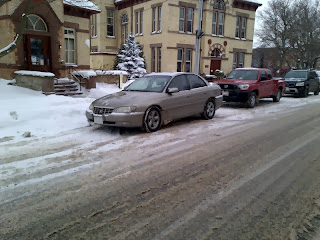 The car was a little underpowered though, so it barely sprinted to 60 mph in less than 9 seconds.  The engine also suffered from some catastrophic timing belt failures.  There was also an issue with cylinder head leaks and water pump failures.  And the tires wore prematurely... as well as other suspension components.  Other than those flaws and a stupid marketing campaign featuring a duck named ziggy, it was great.

But the one thing I do appreciate about the Catera was what it represented as far as Cadillac’s changing views on what American luxury cars should offer.  This was GM’s first rear wheel drive Caddy in years.  The German built Omega was lauded for its great handling and Autobahn prowess, so the bones were there.  The execution was just a bit sloppy.

What it can really be celebrated for was heralding in Cadillac’s new Art and Science designed, luxury and performance oriented stable.  This includes the CTS, re-imagined STS, the XLR and the V8 powered V-series of super performance sedans.  Although the Catera itself was no amazing offering, what it stood for changed the face of Cadillac forever.

Popular Mechanic’s reason why it’s one of the top 10 cars in history(that deserved to fail).

Jalopnik’s little write up on the Catera (including an embedded videoof the car’s Motorweek review).

And the Car and Driver review of the Catera Sport... a little better in many ways than the standard car, but still slow.