Tesla Model 3... It's here and it looks mostly finished! All right!

Tesla unveiled its much ballyhooed Model 3 to an invite only crowd and via live stream this past Thursday.  Looks like it will be a winner because as much as I want to hate it, I really want to drive one.  And that’s right, I said ballyhooed!


The unveiling started out like any other with Tesla’s CEO, uber-techy Elon Musk, being introduced by the car’s design boss Franz von Holzhausen (who has the dual distinction of not only being the lead designer on what could be one of the most ground breaking vehicles in history AND the owner of perhaps the most German sounding name EVER).  Musk stalled the big reveal by discussing how we’re killing the planet and poisoning ourselves with exhaust fumes.  He also reviewed his master plan for shifting the paradigm of sustainable personal transportation – and how their new big factory will be making a lot of batteries.  Seriously, like, all the batteries.


But let’s take a moment to look at Musk’s presentation style.  It’s relatively unpolished and full of little self-deprecating jabs at the company’s history of production issues.  This must make him pretty approachable because the audience felt free to yell stuff at him fairly frequently.  It all helps cement Musk’s public persona as a young, plucky, success-by-the-skin-of-his-teeth type that contrasts against the public’s idea of what automotive executives are like at those other car companies.  However, he is 44 now and it does seem somewhat man-childish.  But he also has a net worth of over $13 Billion, so what the hell do I know?


He also went over the minimum specs:


A trunk and a frunk offering more storage capacity than any other four door sedan.


Supercharging capabilities (for the battery, not for the motor).


5-Star safety rating in all categories.


Sounds good to me.  Also, keep in mind that the batteries in these things sit on the bottom of the car, essentially making up its floor, so its centre of gravity is lower than 700lb dwarf and more evenly distributed than the soul deadening sorrow experienced by a Burger King night shift crew.  So yes, it will likely out handle your C-Class, 3 Series or A4.  Soundly.


Now let’s finally get to the car!  The reveal happened just like any other new car debut, thumping beats, flashing lights, a vague but captivating intro video and three examples rolling onstage to thunderous applause.  Overall, I would say it has the looks to back up its impressive specs.


It has a nice compact exterior somewhat reminiscent of the Mazda 3.  It sports some serious multi-spoke wheels shod with low profile tires that wouldn’t look out of place on a BMW… or the afore mentioned Mazda.  In fact, may I be so bold as to say the new Model 3 could pass as a slightly less swoopy sibling to the Mazda 3?


Is it also a coincidence that both cars have essentially the same name??


Now take away the words starting with “M”.


And now a side by side, paying particular attention to where the C-Pillar meets the quarter panel:

Also, while reading about this car it was pointed out by at least one observant automotive commentator that the trunk probably should have been designed as a hatch instead of a notch.  Why boast about segment leading storage capacity and then limit access to it with a tiny opening?!!?  Why!?!?  It would be like boasting how the plumbing system you designed can flush a whole watermelon but then throwing a standard sized toilet on it.  Sure it can accommodate the problems associated with a binge night of double cheese pizza and all you can eat Indian buffet, but only in theory.


Another thing.  What the hell happened to this things face?  Tesla, you forgot the grill.  I know it’s an electric car and it doesn’t NEED one.  But the car is designed like it’s supposed to have one and they just didn’t put it on.  Like they got to that point in the design, took a break and when they came back they all got sidetracked and moved on to something else.  It’s the most off-putting thing I’ve ever seen on an otherwise acceptably attractive vehicle.

Or even more disturbingly: 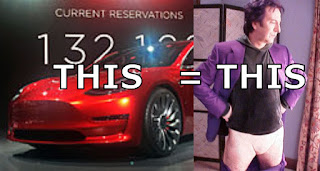 
Ok, so I know it won’t have any effect on people buying it.  Hell, they already have almost a quarter million orders for the thing.  But why was it saddled with this loose end??  The prototype designs that hit the internet all had grills.  The Model S has a grill, right?  So what the frack?!


To be honest I’m only acting harsh to this thing because it’s so awesome.  If I had $35K to spend on a car, I would likely get this one.  But I don’t, so I’m going to complain about it so I feel better.


But damn if that beak isn’t freaky.  So like a 24 hour marinated T-Bone, I would say this car needs to be grilled up STAT. 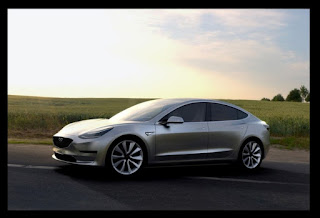