The Ford Durango - The Mysterious Truck/Car That Barely Was

Durango.  The word brings to mind a large SUV packed with a family of 12, camping gear for six years and 25 hunting dogs that never fail to track your prey and retrieve your fresh kill - the ultimate tool for conquering all you survey.  These are the remnants of the guts and glory left behind by RAM when it split off to become its own brand.  In fact, it is the only vehicle left standing that represents the quintessential utilitarian side of Dodge.  So it may come as a surprise that the name Durango is not exclusively synonymous with Dodge.  In fact, before Durango was a Dodge, it was a Ford.

The Ford Durango is one of those great gems of automotive strangeness.  It is a Ranchero/El Camino-like car/truck based on the Fox platform (most famous for underpinning the Ford Mustang for about 2 decades).  More specifically, it is built out of the Ford Fairmont Futura.

The Futura was the sport coupe of the Fairmont lineup, which also included a 2 door sedan, a four door sedan and a wagon.  Now the term “sport coupe” needs to be taken with a grain of salt here.  Many Futuras were powered by underwhelming straight sixes.  At least there was a V8 option, right?  Well, I guess… but keep in mind that we’re talking about a sub-140 horsepower 302.  That’s right, sub = less than.

But the good news is, the Fox platform is a pretty good base for aftermarket shenanigans that will boost your power, handling and overall performance.  If you want to throw your money at a Fairmont, that is.  (Aside: I absolutely support the notion of throwing your money at a Fairmont.  I am in no position to criticize given what I’m working on in my garage.)

Now it needs to be made clear that Ford’s Durango did not come all trucked-out from Ford.  It was a factory authorized modification contracted out to National Coachworks, who would more or less chop off the back end of the car, install a fiberglass bed and attach the rear fascia as a tailgate.  Voila, you have yourself a brand new truck/car.

Despite this seemingly nip and tuck approach to the vehicle’s development, of all the Fairmonts sold at Ford dealers the Durango was probably one of the better looking ones.  The Futura’s B-Pillar serves double duty as a vital structural component and a major design element.  It draws the eye from the side of the car to the roof, giving the car a more aggressive forward lean when compared to other Fairmonts.  It’s also very chunky and it makes the rest of the roof behind this line look awkward and out of place, like it was tacked on as an afterthought.  Since this back part of the roof is chopped off on the Durango, in my opinion the vehicle looks much more thoughtfully designed than the car it is based on.

According to what my research has yielded, there seems to be no consensus regarding how many Durangos were actually produced.  I’ve seen numbers anywhere from between 80 to 350, all made between the years of 1978 and 1982.  Even at the high end of the estimate, it would be a very rare vehicle.  I’ve only ever seen one (At the 2015 Bothwell Car Show - I took a picture of it to prove it). 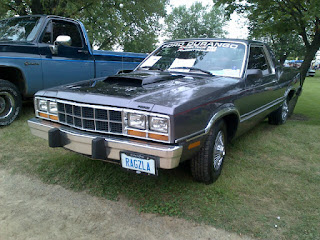 It appears to be a little modified, what with the hood scoop and all.  But I'm pretty certain it's legitimate and therefore a very rare example of late 1970's/early 1980's automotive quirky greatness.

In stock form, every Durango was powered by Ford’s 3.3L 200 cubic inch I-6.  Since the engine bay is designed to accommodate a 302, if you ever do come across a Ford Durango don’t be surprised if you find a V8 transplanted into it.  Also, some folks have taken it upon themselves to convert their own Futura into a truck/car.  Apparently, the thing to remember is that a real Durango has a one piece fiberglass bed and a 3” wide filler piece spanning the back of the car under the tailgate.

This brings me to another quirky characteristic of the Ford Durango.  The taillights are built into the tailgate.  This of course means that if you’re driving at night, your tailgate needs to be closed.  Otherwise your lights would be pointing at the ground and any police officer paying attention will pull you over and present you with a mandatory opportunity to contribute to the public coffers.

Feel free to share your experiences if you or anyone you know has either seen, driven or owned one of these rare ducks.  I for one would certainly love the chance to take a closer look at a Ford Durango.

As always, I’ll be keeping an eye out for more unique cars to profile on the pages of Automophiliac.  Thanks for reading!